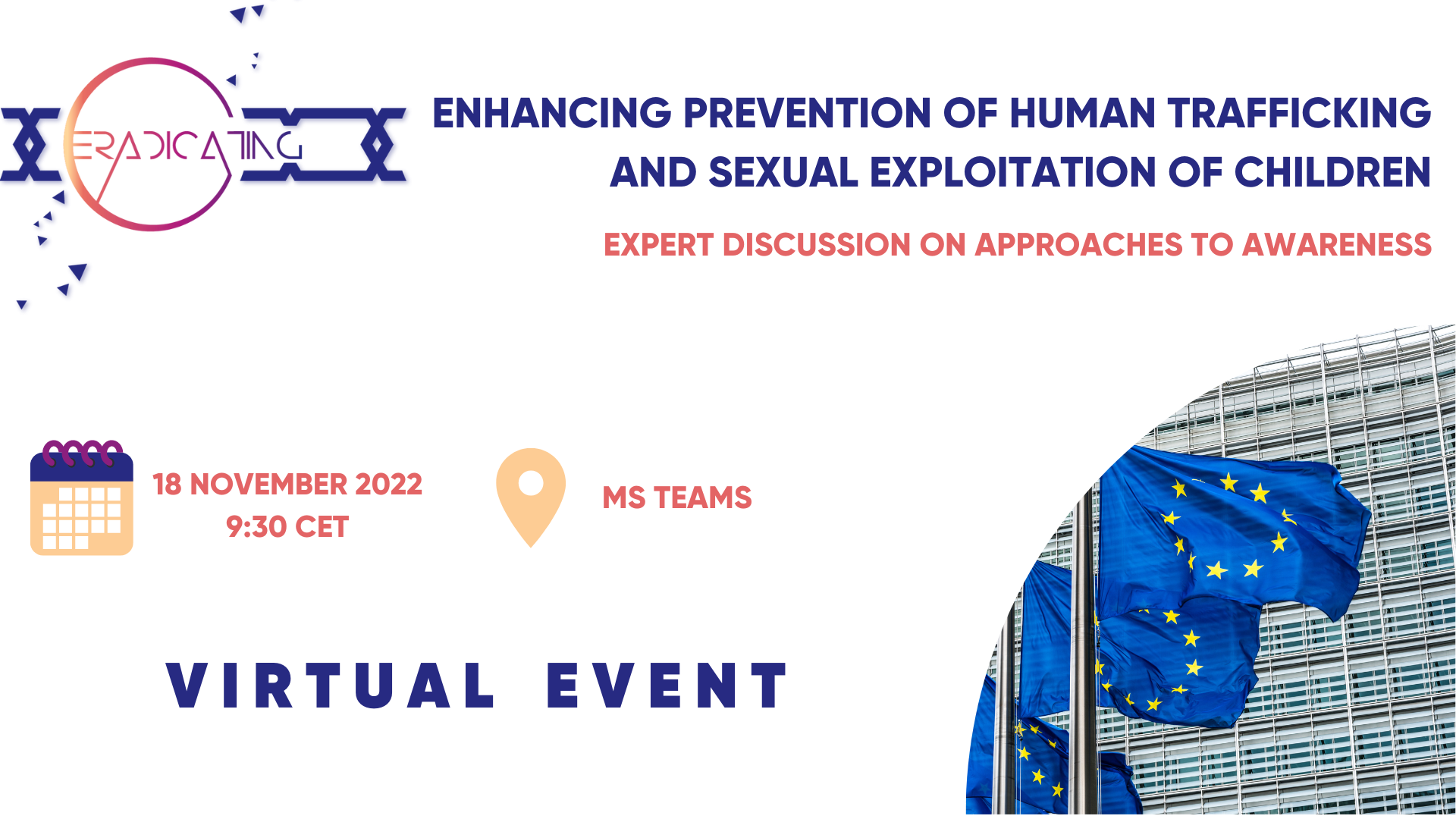 We would like to invite you to the ‘’Enhancing Prevention of Human Trafficking and Sexual Exploitation of Children’’ seminar, which will take place online in MS Teams on the 18th of November 2022. You can access the virtual event from this link.

During the first session of the event, the project team present the reasoning and methodological approach developed under ERADICATING. The session will also include a showcase of one of the project’s innovative tools – the Digital Child Manual in the form of a fairytale, that aims at boosting awareness among Generations Z and Alpha on various aspects of THB, putting the emphasis on mixed forms of minors’ exploitation, and highlighting the social preventative role of civil protection authorities.

The second session of the event will accommodate for a couple of round table discussion which fill bring the focus on the preventive role of police authorities in preventing and combating THB/CSE and the need for promoting multisector cooperation to support THB/CSE victims.

Stay tuned by following us on social media! 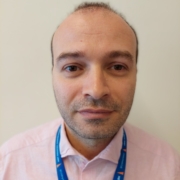 Evangelos Zarkadoulas is a Senior Police Officer (Police Major) of the Hellenic Police, and his expertise is investigating public security crimes (criminal organizations, homicides, armed robberies, etc.). Currently, he is a liaison officer between the Hellenic Police and the EU for security issues as a Justice and Home Affairs Counsellor at the Permanent Representation of Greece to the EU. His portfolio entails the topics of internal security, cross-border police cooperation, and exchange of information in the Justice and Home Affairs field. Additionally, he is a Ph.D. Law Candidate at the Vrije Universiteit Brussel (VUBrussel). The discourse of his research is dedicated to the use of AI by law enforcement authorities. 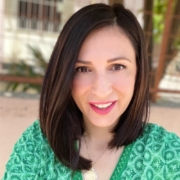 Antonia POTHOULAKI
Senior Researcher at KEMEA
ERADICATING’s Project Manager
Dr. Antonia Pothoulaki (PhD, Post Doc) is a Special Scientist in the field of Organized Crime (Combatting Trafficking in Human Beings) and teaching Experimental Criminology- Social Control of Crime at the Hellenic Police Officers School/ Ministry of Citizen Protection. She holds a PhD on Applied Ethics Philosophy with specialization on “Transnational Trafficking” and Ethical Issues ” and a Post-Doctoral on “Transnational Trafficking, Human Rights and Ethical-Psychological Aspects”. She is author of the book entitled “Trafficking “Paths” in Out of Law “Routes” – Ethical, Legal and Psychological Aspects”. She is Senior Researcher at Centre for Security Studies of the Hellenic Ministry of Citizen Protection where she is involved in EU and Nationally Funded R&D projects related to Organized Crime Research & Prevention Policy, Radicalization, Terrorism, Justice, Domestic Violence and Combatting Trafficking in Human Beings.
Stefan RALCHEV 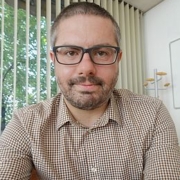 Research Fellow, Security Program
Center for the Study of Democracy
Stefan Ralchev is Research Fellow in CSD’s Security Program. His expertise is in the fields of human trafficking, human security and comparative politics and European integration of Southeast Europe. Before joining CSD, he worked at Bulgaria’s National Commission for Combating Trafficking in Human Beings, a government body under the Council of Ministers, where he helped devise Bulgaria’s policy responses to the crime of human trafficking and coordinated the Commission’s international activities. He also has previous experience with civil society organisations, including Transparency International – Bulgaria. 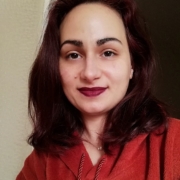 Natasha ALEXOPOULOU
Project Manager and Researcher
Human & Fundamental Rights Unit, KMOP
Natasha Alexopoulou is a legal advisor and currently collaborating with KMOP as a project manager and researcher in EU funded projects related to THB, migration, SGBV and children rights. She has studied law at the Law School of Athens and has a Master’s degree in Criminal Law and Criminal Procedures.
Anton Van DYCK 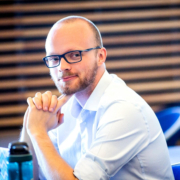 General Manager
PAYOKE
Anton Van Dyck is the General Manager at Payoke, one of the three government-recognized specialized centers for victims of human trafficking in Belgium. He has a background in law and public administration from the Vrije Universiteit Brussel (VUB) and Queen Mary University of London (QMUL). Before his time at Payoke, he analyzed value chains on human rights compliance in the private sector and worked as a lobbyist on sexual and reproductive health and rights in Brussels. 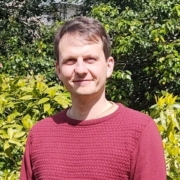 Frederik Dejonghe is a Legal counselor, who specializes in helping victims of trafficking through the loverboy modus operandi at Payoke. Having spent years in international consulting, he found his way to Payoke in 2019 to help organize the center for referral of victims of loverboy traffickers in Flanders. 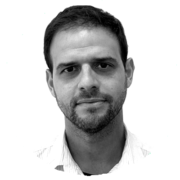 Yuval Sanders is a leader in open-source intelligence and data analysis. In the past decade he has lead innovative intelligence products and methodologies to market and disrupted the traditional verticals such as public-sector organizations, banks and more. Yuval has over a decade of experience in open-source intelligence and data analysis, and has a proven track record in integrating new technologies into both public and private organizations of all sizes. Yuval is passionate about utilizing emerging technologies and data science to enhance analytical workflows and to promote private-public integration and cooperation. Yuval is the CEO and co-founder of Falkor, a data-driven investigation and analytics platform for analysts, and also serves as the co-founder of IOTT Integration, a firm specializing in open-source intelligence technology and investigative methodology. Yuval is fluent in Italian, Spanish, English and Hebrew. Yuval has studied at the University of Padova, Italy. 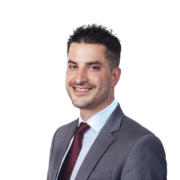 Ramin FARINPOUR
Course Director
European Criminal Law Section
Academy of European Law
Ramin Farinpour is a Course Director in the Academy of European Law’s European Criminal Law Section since November 2011 and Senior Lawyer since January 2017, dealing with terrorism, police cooperation, trafficking in drugs and human beings, migrant smuggling, financial and economic crime, as well as border management and detention conditions. He was seconded to the Austrian Federal Ministry for Europe, Integration and International Affairs in 2018 to work as a Desk Officer during the Austrian EU Council Presidency in the Unit for EU Coordination, assisting with the preparation of the COREPER I and II sessions and coordination of the Austrian Presidency for the Ministry. Prior to his role at ERA, he worked in the European Commission’s Directorate-General for Enlargement for three years in the Institution Building Unit, where he organised targeted, effective technical short-term assistance for the TAIEX (Technical Assistance and Information Exchange Instrument) beneficiary countries (the EU Candidate Countries, the potential Candidate Countries, the countries covered by the European Neighbourhood Policy Programme and Russia) in the Justice and Home Affairs field. He has previously also worked in the Directorate for General EU Affairs & Institutions, the European Ombudsman’s Legal Department and the Austrian Red Cross’ Austrian Centre for for Country of Origin and Asylum Research and Documentation (ACCORD). 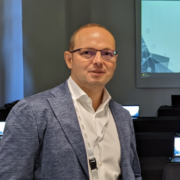 Mauro Manolo BELMONTE
Consultant for Italian Prosecutor’s Offices
CEO and Founder of MBS Engineering
Mauro Manolo Belmonte is a consultant for Italian Prosecutor’s Offices, supports investigators with their cases in Trafficking Human Beings, sexual exploitation, drugs trafficking, fraud, financial crimes and other criminal organisations.
In the “Centre of Excellence for Stability Police Units” of Vicenza, he trained the police officers as part of the project EUPCST live exercise on “Combating Trafficking Human Beings” in EU Civilian CSDP missions. At this moment his company MBS is the leader in informatics technologies applied to investigative intelligence. Within MBS Engineering he has developed an advanced analysis tool CIT in cooperation with the Italian law enforcement. 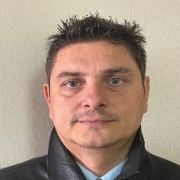 Vasileios KOUTSOLIAKOS
Senior Police Officer
International Police Cooperation Division of Hellenic Police
Vasileios Koutsoliakos is a Senior Police Officer (Police Lieutenant Colonel) who serves on International Police Cooperation Division of Hellenic Police the last for years. His portfolio entails on EU and International Law Enforcement Cooperation on Serious and Organized Crime and Schengen Area. He has also worked as an intelligence officer in Counterterrorism Unit of the HP and he is an expert in international terrorism and radicalization. He graduated from the Hellenic Police Academy and earned a bachelor’s degree in international, European and regional studies. He has a master’s degree in international relations and strategic studies from Panteion University and another in crisis, mass disaster and emergency management from the University of Athens. He has also graduated National Security School.
https://eradicate-thb.eu/wp-content/uploads/2022/10/Save-the-Date.png 1080 1920 ethb https://eradicate-thb.eu/wp-content/uploads/2022/02/eradicating144-300x78.png ethb2022-10-12 13:56:132022-11-15 16:41:32Enhancing Prevention of Human Trafficking and Sexual Exploitation of Children

Practical Guide for Law Enforcement Authorities when in contact with Victims...

This site uses cookies. By continuing to browse the site, you are agreeing to our use of cookies.

We may request cookies to be set on your device. We use cookies to let us know when you visit our websites, how you interact with us, to enrich your user experience, and to customize your relationship with our website.

Click on the different category headings to find out more. You can also change some of your preferences. Note that blocking some types of cookies may impact your experience on our websites and the services we are able to offer.

These cookies are strictly necessary to provide you with services available through our website and to use some of its features.

Because these cookies are strictly necessary to deliver the website, refuseing them will have impact how our site functions. You always can block or delete cookies by changing your browser settings and force blocking all cookies on this website. But this will always prompt you to accept/refuse cookies when revisiting our site.

We fully respect if you want to refuse cookies but to avoid asking you again and again kindly allow us to store a cookie for that. You are free to opt out any time or opt in for other cookies to get a better experience. If you refuse cookies we will remove all set cookies in our domain.

We provide you with a list of stored cookies on your computer in our domain so you can check what we stored. Due to security reasons we are not able to show or modify cookies from other domains. You can check these in your browser security settings.

These cookies collect information that is used either in aggregate form to help us understand how our website is being used or how effective our marketing campaigns are, or to help us customize our website and application for you in order to enhance your experience.

If you do not want that we track your visit to our site you can disable tracking in your browser here:

We also use different external services like Google Webfonts, Google Maps, and external Video providers. Since these providers may collect personal data like your IP address we allow you to block them here. Please be aware that this might heavily reduce the functionality and appearance of our site. Changes will take effect once you reload the page.

The following cookies are also needed - You can choose if you want to allow them: